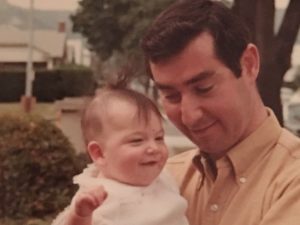 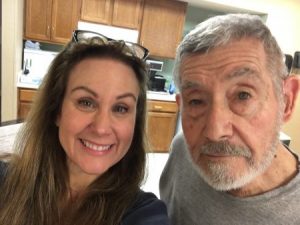 I had a really nice chat with my deceased dad today. Now I’m all choked up and grateful.

One year ago today my father released his long suffering body. I had received a message in a dream a few weeks earlier and changed my plans in order to fly across the country and see him before leaving to lead my retreat in Bali. It was clear to me from that visit that he no longer benefited from being in a body. I told him I loved him, and it was okay for him to leave.

I was leading my retreat in Bali when I got the message from my stepmother. He died peacefully in his sleep. I felt so much relief and release in that moment… it was the most effortless, energetic, productive day of coaching I’ve had in decades.

And then I had a year of slow-simmering grief. I took a very long break from business (and I’m grateful for the abundance I created that allowed me to do so).

Dad’s Alzheimer’s decline was such a slow, gradual death that I had been mourning for years before his actual death. The person I knew had left long, long before he left his body. It wasn’t until 3 weeks ago, almost a year later when my father’s cousin died suddenly, that the loss of my father really hit hard. Like a two-by-four in the face.

Between pandemic news, several family deaths in April, and the looming anniversary of Dad’s death, I started falling into a really dark place and lacked my usual sunny optimism. I felt too sad to do much of anything. I watched a LOT of Netflix and cried.

And then this morning, on the actual DAY (what do we call this day? Death Day? Departure Day? Ascension? Blast off?)… the heaviness lifted. Weird, huh? (I checked in with my stepmother–same for her.)

And for the first time in my life I wanted to talk to a dead person… I wanted to check in with Dad.

Now I’m about as psychic a person as you’ll ever meet, but I have a friend who sees dead people. All the time. I knew she could take me farther than I could take myself. I wanted the best, and Kimberly Reyes is the best.

So Dad and I had a really good chat.

I got to reconnect, catch up, ask his perspective on the world today (no, he wouldn’t tell me how the November election will turn out), and he gave me the same advice he’s been giving me for the last 30 years… but maybe a little more useful to me now that I have more maturity and he has less incarnation baggage. 😀  Death’s been good for Dad. But I already suspected that.

Nice little side note–I asked Dad if he had a message for my stepmother. He said he visits her in her dreams all the time. “I have that covered,” he said. When I spoke to my stepmother an hour later, she confirmed this was true.

My big take away is I feel a monumental energy shift that I didn’t expect. I feel the return of my sunny optimism even in the face of all the world’s awful. I’m going to take Dad’s advice and focus my attention on my happy marriage and the husband I adore, and on helping all the people I can with the work I do best. 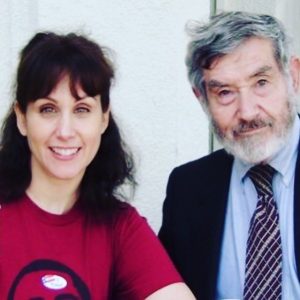 Copyright 2020 Morgana Rae… OBVIOUSLY.
Wanna reprint it for your blog or e-zine? Cool! Just post a “written by Morgana Rae” credit, and tell your readers to get my FREE Money Magnet Video Gift at www.morganarae.com. Thanks!